This page contains tips and tricks for developers, further resources, along with information on how to set up your build environment on your platform.

Before building Nimbus for the first time, make sure to install the prerequisites.

The git repository has 3 main branches, stable, testing and unstable as well as feature and bugfix branches.

The unstable branch contains features and bugfixes that are actively being tested and worked on.

The testing branch contains features and bugfixes that have gone through CI and initial testing on the unstable branch and are ready to be included in the next release.

The stable branch tracks the latest released version of Nimbus and is suitable for mainnet staking.

You can now follow the instructions in this this book by replacing make with mingw32-make (you should run mingw32 regardless of whether you're running 32-bit or 64-bit architecture):

After cloning the repo:

Nimbus comes with a build environment similar to Python venv - this helps ensure that the correct version of Nim is used and that all dependencies can be found.

Makefile tips and tricks for developers

This repository contains a set of scripts used by the client implementation teams to test interop between the clients (in certain simplified scenarios). It mostly helps us find and debug issues.

Stress-testing the client by limiting the CPU power

The limiting is provided by the cpulimit utility, available on Linux and macOS. The specified value is a percentage of a single CPU core. Usually 1 - 100, but can be higher on multi-core CPUs.

The beacon chain simulation runs several beacon nodes on the local machine, attaches several local validators to each, and builds a beacon chain between them.

To run the simulation:

To clean the previous run's data:

To change the number of validators and nodes:

If you’d like to see the nodes running on separated sub-terminals inside one big window, install Multitail (if you're on a Mac, follow the instructions here), then: 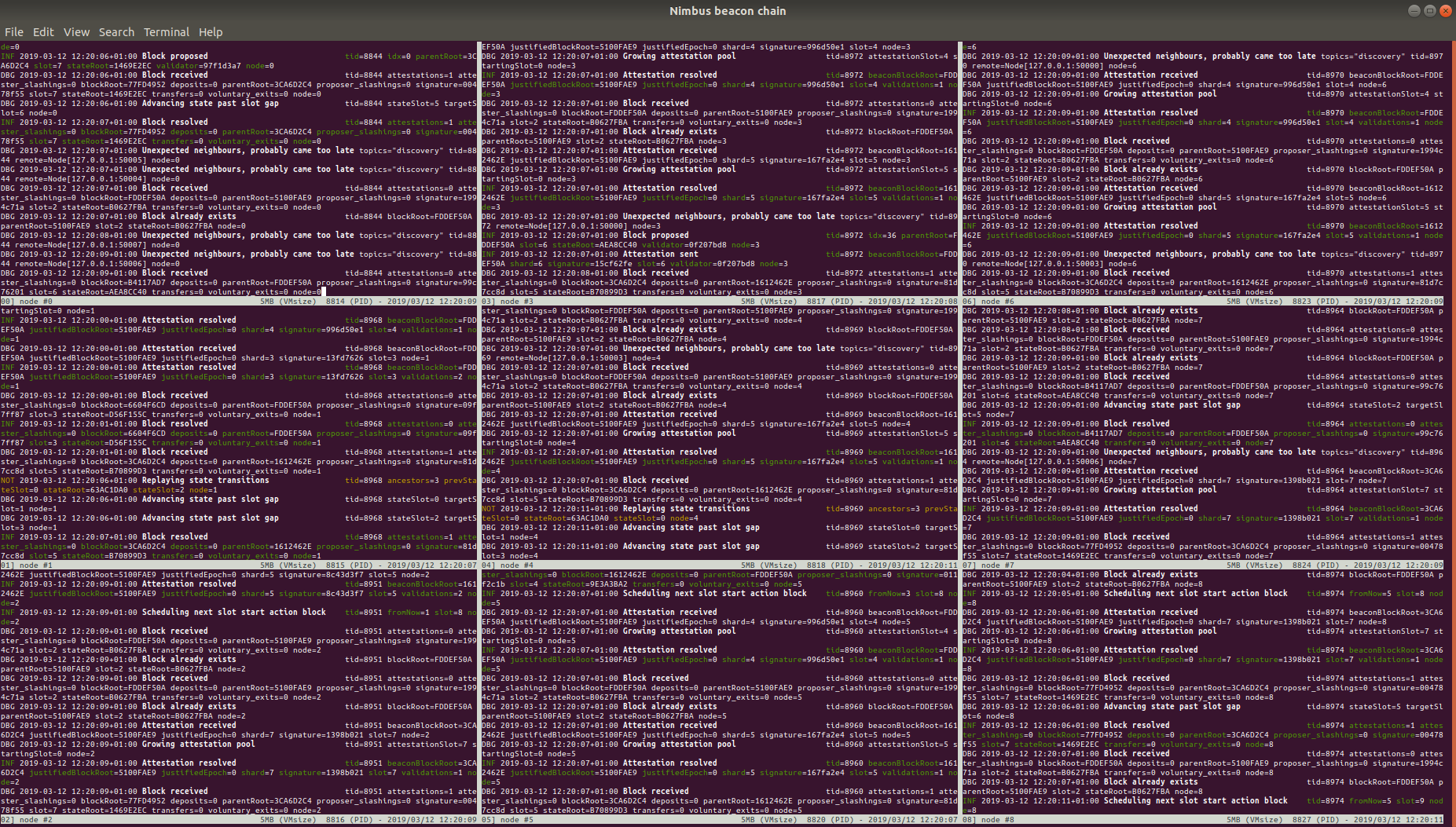 You can find out more about the beacon node simulation here.

This simulation is primarily designed for researchers, but we'll cover it briefly here in case you're curious :)

The state transition simulation quickly runs the beacon chain state transition function in isolation and outputs JSON snapshots of the state (directly to the nimbus-eth2 directory). It runs without networking and blocks are processed without slot time delays.

Use the output of the help command to pass desired values to the simulator - experiment with changing the number of slots, validators, , etc. to get different results.

The most important options are:

For example, to run the state simulator for 384 slots, with 20,000 validators, and an average of 66% of attesters doing their work every slot, while outputting snapshots of the state twice per epoch, run: